Caren Velasquez was a line of H-IIIA series android prototypes. Designed by Dr. Miguel Angel Velasquez de Silva, they were given the appearance and personality of a teenage girl, and made to believe herself as Dr. Velasquez's biological daughter.

According to her profile in the Ozymandias' computer, the Caren prototype was completed on the 13th of November, possibly in 2248. The prototype Caren accompanied Dr. Velasquez on board the ship when it was ready for launch on its mission to α2, and was given a job as his assistant in the AI R&D department, and registered as a "second generation" crewmember on 14 February 2248.[1] Soon after her activation, Dr. Velasquez succeeded in upgrading her AI to allow her to express realistic emotions.[2] Perhaps to make her truly part of the crew, the H-IIIA Android body was designed to be tagged by the ship's internal sensors as a life form, allowing her to be tracked.[3] Later that year, the passengers and crew began dying from radiation poisoning caused by a nearby comet. Caren was given orders by Captain Satoko Evans on 15 September to handle space funerals, owing to the crew shortage.[4]

What happened to Caren over the next three hundred years is uncertain. It is possible the prototype entered into a cryogenic suspension chamber following the funerals. Over the next three centuries, the ship's computer - MTHR 248 - followed Captain Evans' orders to create new lifeforms to settle on α2, but finally turned the ship around when it was ruled impossible. By this point the initial plan of a race of human clones of the original crew had radically changed to creating primate-dinosaur hybrid creatures. During the trip to Earth, MTHR 248 began production of new H-IIIA bodies,[5] each identical to the prototype and able to receive downloaded sensory information. When the ship exited warp in orbit over Jupiter, the SOAR mission to investigate the ship was able to detect Caren with the internal sensors, walking around the Storage Sector.[3][6] Warned by MTHR that the SOAR members were a threat, she ran away from Patrick Tyler back to Dr. Velasquez's quarters,[6][7] but began to calm to him after he saved her from dinosaurs.[8] When Tyler arrived at Dr. Velasquez's quarters, she was holding a photograph of the doctor. Caren took off once more, when she heard Tyler talk about deactivating MTHR, which proved her fears. Tyler chased her to the Hologram Room, where he was able to calm her down once more, telling her how she reminded him of his sister Margaret who had recently died. Concerned about Caren's developing closeness to Tyler, MTHR attempted to destroy the ship's Hologram Room to kill them both,[9] but this was averted by another operator - Sonya Hart.[10] Soon after, Caren; Hart and Captain Jacon Ranshaw made their way to the ship's DNA Laboratory to meet up with Tyler. While in the room she was damaged by a mutant - Regulus - causing irreparable internal damage. After being carried out of the room, she shut down and her body dissolved.[11]

The experiences of this body were uploaded to a newly activated H-IIIA, who instinctlvely ran up to Tyler after seeing him in the ship's lobby. Tyler and Hart did not tell her about her android nature, and she stayed with Hart while Tyler continued his investigation, but took off on her own to perform repairs to the ship when she discovered Tyler was close to death on the hangar deck when the ship's life support was cut off. Not long after, the Third Energy core destabilised, and all three evacuated to the MTHR Sector as the rest of the ship fore was destroyed. Entering the MTHR Room with Tyler and Hart, Caren finally understood her artificial nature, which traumatised her. When the three were confronted by the Cebalrai, Caren rejected Tyler's attempts to keep her safe and sacrificed herself to trick Cebalrai into falling down a shaft. 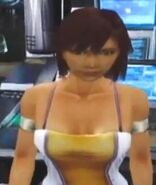 Excerpt from DINO CRISIS 3 PERFECT ALIVE GUIDE.
Add a photo to this gallery

To keep her true nature a secret, Caren was repeatedly described in media as a survivor of the disaster by unknown means.[12]

Retrieved from "https://dinocrisis.fandom.com/wiki/Caren_Velasquez?oldid=36198"
Community content is available under CC-BY-SA unless otherwise noted.