Carnotaurus is a large carnivorous dinosaur that was taken by the Noah's Ark Plan personnel to the distant future. They have distinct bull-like horns (hence the "taurus", Greek for "bull", in their name), and appear to exhibit sexual dimorphism. The Carnotaurus lived in the Cretaceous Period.

Carnotaurus were built like most carnivorous dinosaurs, save for the Carnotaurus' distinctive bull-like horns, and their unusually short arms, which are even shorter than those of a Tyrannosaurus. This dinosaur is significantly smaller than a Tyrannosaurus, but roughly the same size as an Allosaurus, measuring up to 9 meters in length. Despite its bulky-size, Carnotaurus had powerful long legs and a flexible body to assure fast agility. It is speculated that Carnotaurus only feeds on small dinosaurs, lizards and prehistoric rodents.

Like its arms, Carnotaurus' skull was relatively short and blunt, but had a high degree of flexibility which allowed it to open its jaws wider than any other dinosaur, similar to modern snakes. This allowed the dinosaur to swallow smaller prey whole. The jaws were enabled for quick bites (as demonstrated in the game itself). In addition to this, the Carnotaurus had a bite-force that's two times stronger than an alligator's, though the jaws were not suited in high precision of catching small prey, the bites were surely used to weaken smaller prey, like small-sized Sauropods. This concludes that Carnotaurus lived much as an ambush predator, mainly preying on larger animals (this more time frequently shown in the game).

Mike Wired first encountered a breeding pair of Carnotaurs after a brief attack from a wave of Velociraptors sent by "Trinity". Attacking the raptors, one of the pair ate one before they both turned their attention to Mike. At some point afterwards, they were subject to the Third Energy anomaly and taken into the temporal nexus known as "Hyperspace" and fought Mike there for a second time. The third and final encounter with the Carnotaurs takes place in the abandoned city. After their third battle with Mike, they decide to flee when they hear a larger predator approaching the area. As they are attempting to run away, they are still caught in the tracks of that larger predator: the Jet-black Tyrannosaurus. One is killed by the Tyrannosaur, while the other presumably escapes.

The two Carnotaurus always confront the player together. They have three distinct attacks: bite, charge, and tail whip. Weapons such as shotgun and grenade launcher are useful to keep them at bay and even more powerful weapons like the rocket launcher or the missile launcher do a ton of damage to them. It should be noted that the Carnotaurs can also "play" with the player, with one approaching slowly while the other charges right away. In chapter 2 and chapter 4, they can accidentally bump into each other when they charge. When that happens, the Carnotaurus that got hit will turn and roar at the other Carnotaurus. It's rather easy to have that occur as players can just use one of the Carnotaurs as cover when the other one charges. The players can also use the opportunity to get some damage in while the two Carnotaurus briefly "argue" with each other. However, that cannot occur in stage 5 since the player is stationary and the two Carnotaurs stay on their own sides of the stage. 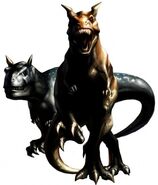