Compsognathus is the smallest dinosaur in the series. It usually poses no threat to humans. Like certain birds, it has an obsession with stealing small, shiny items.

The Compsognathus belongs to a genus of dinosaurs known as Coelurosauria, which consists of small dinosaurs closely related to modern avians. Compsognathus' sizes vary, from a mere 40 centimeters to 100 centimeters in length. They have narrow jaws, long skinny legs, and slim body which allow the tiny dinosaurs to fit through small gaps. Some specimens of Compsognathus were even discovered with feathers on their body, suggesting that birds could have evolved from Compsognathus. The dinosaur's diet mainly consisted of insects, small lizards and presumably carcasses.

As one of the dinosaurs that actually lived alongside the humans in the 3rd Energy Facility, Compsognathus proved to be a big problem for the scientists and soldiers protecting their facility, due to its natural instincts to steal shiny metallic objects, particularly the staffs' belongings. Although the Compys are not particularly dangerous to humans, a solution had to be decided upon to handle this issue.

Compsognathus played a very minor role in the games. In Dino Crisis, it is encountered twice in large groups. The first encounter is in the Medical Room Hallway where they are found eating a dead Velociraptor. The second encounter is in the corridor, that has the elevator Rick needs to repair to get to Floor B3. If the player approaches them, they will then jump and bite Regina. They don't cause too much damage to the player but can be very annoying. They can usually be taken out with one handgun bullet.

Compsognathus will often run out of open ventilation ducts. It is unknown whether the researcher in the room within the corridor and the Raptor in the Medical Room were actually killed by the Compsognathus. They may have been scavenging as they are often thought to have been opportunists.

In Dino Crisis 2, its only notable role was when it stole an important item from the player and the player had to trap it in a room, one of the game's simplest yet most annoying puzzles. If the Compsognathus hides inside a blockade or structure, player can use Dylan's machete to lure it out again to avoid wasting any ammo. The Compsognathus in Dino Stalker was used only as a wildlife ambient creature and can't do any harm.

If the player beats Dino Crisis 2 on hard mode, the Compsognathus is unlocked along with the Triceratops and both can be purchased with Extinction points. The Compsognathus can cause large amounts of damage in both modes of Extra Crisis. However, it can be killed in one hit by the enemy. Thus, it mainly serves as a joke character in Extra Crisis. Its alternate color for Player 2 in Dino Duel appears to be a homeage to The Lost World: Jurassic Park's Compsognathus. 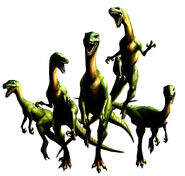 Pack of Compys in Dino Stalker

Picture of Compys at the Researcher's Notebook.

Even though no direct evidence for the presence of feathers in Compsognathus has been found, preserved feathers in the fossils of compsognathids Sinosauropteryx and Sinocalliopteryx proved that feathers were present in this group.