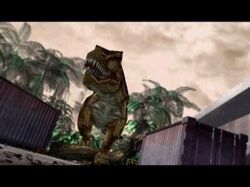 Cyclops is the name given to a Tyrannosaurus that stalked TRAT and SORT agents Dylan Morton and Regina in the future world.

A large Tyrannosaurus, Cyclops' appearance is typical of Tyrannosaurs, appearing almost identical to one which stalked Regina on Ibis Island. As the in-game Dino File and the instruction manual state; it is 14.5 meters/47.5 feet in length. Its most distinguishing feature was its right eye socket, which was damaged and the eye destroyed when it was struck by a rocket-propelled grenade.

A Tyrannosaurus discovers the recently established T.R.A.T. camp following the massacre of its soldiers by a Velociraptor pack, which it may have heard. At its arrival, the Raptors fled into the forest, leaving Regina, Dylan, and David alive. The T-rex enters the camp and knocks over a tree that nearly crushes Dylan. Dylan is stunned while Regina fires her Heavy Machine Gun at it, but it does nothing. David fires an RPG at the T-rex's right eye, intending to kill it. Instead, its head and body remains largely intact save for its destroyed eye. The T-rex losing its right eye here is the reason why Dylan decides to call it "Cyclops" later on. Ignoring David altogether, Cyclops chases Regina and Dylan to a cliff edge, forcing them to jump off, with the dinosaur barely missing with its jaws.

Having failed, Cyclops left the camp and traveled west through the forest to the abandoned military base, where it encountered Dylan again. It chases after Dylan, and attempts to step on him when he was seen on the ground after dodging the explosive discs shot at his direction by two Full Faces. Cyclops misses due to Dylan rolling out of the way. Cyclops waited outside as Dylan was inside the Military Facility. It chases Dylan again when it saw that he came out of the Military Facility, but failed to kill him, because Dylan was able to get into the Hardware Storage building fast enough.

When Dylan did not leave the Hardware Storage building for a while (due to him being locked inside), Cyclops decides to leave the area altogether. It is seen walking under Regina as she crossed the Suspension Bridge.

Later on, Cyclops was walking past the forest at the second North Route in the Jungle area, scaring several Raptors, and not noticing Dylan run by.

Cyclops then travels to Edward City and encounters Dylan once again, at the City/Warehouse Quarters. The dinosaur charges towards Dylan, but Dylan successfully dodges it. Dylan sees a nearby escort tank and decides go inside it to use it against Cyclops. Because Cyclops is so durable that even the tank can't do any serious damage to it, escaping was still Dylan's only option. When Dylan was able to escape by narrowly getting across a closing gate in the tank, Cyclops decides to leave the area.

Cyclops later meets Regina at the missile silo, walking towards her. However, it stops in its tracks and turns when it senses another predator approaching. The Giganotosaurus breaks through the wall and Cyclops gets knocked around by its head. The Tyrannosaur gets up and bites the Giganotosaurus's right leg, but does no damage to the larger dinosaur. Cyclops lets go when the Giganotosaurus slams its head at it. Then, Cyclops gets picked up and thrown a great distance, and is presumably killed after the Giganotosaurus comes in with a bite.

The Cyclops has made numerous appearances in the game either directly or indirectly:

Cyclops is playable in Extra Crisis and serves as the final boss in Dino Colosseum as well. If player 1 plays as Cyclops in Dino Colosseum, the CPU-controlled Cyclops will be maroon colored. In Dino Duel mode, player 2 doesn't play as Cyclops and instead ends up with a black Tyrannosaurus with both eyes intact. 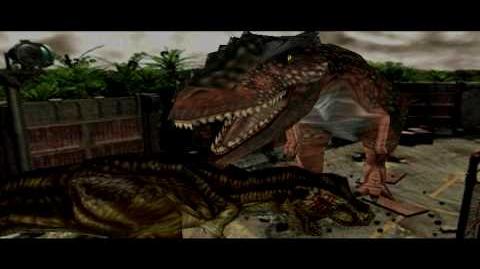