Dylan Morton (ディラン・モートン, diran mōton?)was a US Army operator who served as a Lieutenant in the Tactical Reconnoitering and Acquisition Team during the infamous 2010 Third Energy Criticality Incident. In the years following TRAT, Morton was brought into the Noah's Ark Project to deal with a further catastrophe involving Third Energy.

As a young man, Morton was a member of a street gang. During a gang war in the 2000s, Morton was targeted by their rival street gang, who instead murdered his mother and sister at their home while he was out. Disturbed by the experience, Morton left the gang and that lifestyle behind to join the US Army to make up for his mistake. He managed to retrieve his sister's necklace, which he kept with him at all times.[1]

By 2010, Morton had risen through the ranks and become a First Lieutenant in TRAT, an Army special operations taskforce. In May of that year his platoon was ordered on a time-travel operation to rescue the survivors of a Third Energy accident in Edward City several months prior. The camp was attacked by a pack of Velociraptors, and the entire platoon was wiped out save for Morton, David Falk and Regina, a SORT agent on assignment to the team.[2] The three continued their mission as normal, and soon discovered they had overshot Edward City by some two decades, with a jungle expanding to take over much of the terrain west of a lake, and with it the expansion of dinosaur territory. When Morton and Regina linked with David in Edward City, the last of the civilians perished,[3] and David himself died when an Allosaurus attacked them at a river.[4]

Morton was washed out downriver, where he was saved by a teenage girl, Paula. Reaching a high-tech facility, he discovered his destiny, that in 2055 he would again time travel to the region as the leader of the Noah's Ark Project, and bring with him the very dinosaurs that populate it, victims of a time-displacement catastrophe, and also finding Paula to be his own daughter. Regina traveled through a timegate to 2010, promising to rescue him and Paula with improved technology.[5]

How Regina saved Morton and Paula is not known, but the two were prevented from escaping back to 2010 by the Noah's Ark Project's computer system, MTHR, which malfunctioned and began time-displacing 21st century landmarks, sending them to another universe known as Hyperspace. The two planned to temporally-displace a third party moments before their death; this way, Morton felt, he would not be sending them to their deaths as it was always their destiny. Their candidate was Lieutenant Mike Wired, an American pilot destined to be killed in combat in 1943. Wired succeeded in repairing MTHR, and Morton returned to 2010.

In the years between 2010 and 2055, a crisis emerged on the Earth as a temporal anomaly resulting from Third Energy began displacing dinosaurs. Threatened by the possibility of temporal displacement wiping out humanity (or preventing it from existing), the Noah's Ark Project was established. The goal was to send these displaced dinosaurs three million years into the future where they would cease to be a harm to them. Morton, now a Colonel, led the mission and the teams brought their families along. At the end of the mission, the timegate stopped working and the dinosaurs escaped containment, killing most of the team. Morton himself lived long enough to record a message he knew his younger self would eventually listen to.

In the novelization, Morton's younger self received the message and after going back to his own timeline it is implied that he could use this acknowledge to make sure every survivor in Edward City was rescued, as well as preventing the deaths of Paula and his colleagues (and their children) during the Noah's Ark Project. 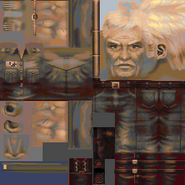 Dylan armed with a shotgun

A hologram of Colonel Dylan Morton, 2055. 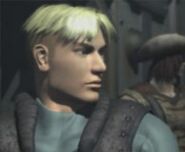