The "Full Faces", also known as "Helmet People", are a group of youths and Androids that stalk and constantly attack Dylan Morton and Regina in Dino Crisis 2.

Due to the lengthy nature of the Noah's Ark Plan, the soldiers and scientists responsible for it brought their families along with them while transporting temporally-displaced dinosaurs three million years into the future from 2055, intent on averting a temporal catastrophe. At the end of the mission, their technology failed them with the Time Gate shutting down and their MTHR computer malfunctioning. Most of the soldiers were killed and the children were injured in the fighting with the dinosaurs, and were placed within life support machines to recover. Their long habitation within machines originally intended for the psychological development of dinosaurs led to the children having speech difficulties as well as developing an instinct of protecting the dinosaurs, and a distrust of the other humans,[1] sent there from 2010.

Some of the children were healed and woke up when they were around seventeen or eighteen years old while the rest took longer to heal. Several months before T.R.A.T arrived they began directly attacking the other humans trapped in that time period from Edward City, upsetting the ongoing attempts by the military to launch a third-energy missile. The survivors had attempted to reason with the youths but their attempts were fruitless since the children could not understand them. Dozens of children, including two helmeted boys, died during these confrontations and their autopsy records sent over to Colonel Maison, leading to an attack from the teens on the Third Energy laboratory complex to recover those records.

By the time T.R.A.T arrived to the future to rescue the survivors of Edward City, there were only three Helmet People, one girl and two male androids, left while the rest of their colleagues died and some were still in their chambers. Dylan first saw one of the androids running away from him despite his pleas that he was there to help, mistaking the android for a survivor of Edward City, and while trying to avoid a T-Rex Dylan encounters both androids hiding behind a container who try to kill him but their weapons' bullets are so slow that Dylan easily avoids them and eventually escapes the area.

While Regina is on her way to help Dylan after he accidentally locks himself in a room, she is suddenly attacked by the two androids who had attacked Dylan but this time there was a girl accompanying them. The trio shoot at her but she manages to dodge the bullets so the helmeted people try to flee despite Regina trying to reason with them by crossing a heavily damanged bridge but when the girl tries to cross it part of the bridge collapses under her feet and she nearly falls to her death when Regina grabs her hand just on time. Regina then sits the girl down, takes her helmet and becomes shocked to find that her attacker was such a young girl and, due to the girl not being able to understand Regina's lenguage she refuses to cooperate with her so Regina takes her to the nearest room and handcuffs her to a pipe and later has Dylan help her bring the girl to the ship and handcuff her once again to another pipe while they try to find something to fix their ship which the two other helmeted people had trashed to the point where the ship cannot move, yet once the girl takes a closer look at Dylan she stops her struggling and looks at him with curiosity, as if trying to say something.

After the remaining survivors from Edward City had been killed by the dinosaurs, Dylan becomes separated once again from Regina and David and one android attempts to kill Dylan but the girl arrives and tries to separate them, only for the android to push her away and accidentally ripping the girl's necklace off her neck while trying to tackle Dylan but ends up being killed when he falls over a highway since Dylan simply stepped aside and the android fell off the highway bridge to his death. Dylan recognizes the broken necklace as it being the same one that his sister used to wear until she was killed by a street gang whom a younger Dylan had a feud with, this makes Dylan suspect that the Helmet People come from a different timeline.

Dylan's theory is eventually proven right when he encounters the same girl once again and she guides him to a facility that she refers to as "Home" while Dylan protects her from the raptors that they find on their way there. In the facility, the girl uses a computer and an hologram of an elderly man appears before them. The man explains the situation and reveals that in fact he is Dylan Morton from the future, now a Coronel, and reveals that the girl he is with is in fact his daughter from the year 2055, Paula Morton, which Paula confirms by pointing at the hologram and saying "Papa". Coronel Morton explains the reason for Paula and the other children'd condition and asks Dylan to take them back to his time. Once the Hologram disappears, Dylan and Paula prepare to go to the "Gate" Development Lab when they hear a voice saying that the building has been detonated and will be destroyed in five minutes while both Dylan and Paula dodge a bullet and realize that the last android has followed them. Paula runs away while Dylan grabs the android before he can run after her and wrestles him to the ground until a Giganotosaurus destroyed the bridge he was standing in, causing him to fall to his death just the first android.

The youths are known for their largely identical uniforms consisting in black full-face helmets with red visors, black fingerless gloves and black armguards and black leather rider suits with red belts. Paula Morton wears shorts with a small red belt around her thigh and thigh-high knee leg guards possibly made from the same material. Whether this was a personal modification or the "standard" for female youths is unknown since she is the only female encountered.

In the novelization, it is implied that after Paula and Dylan Morton are rescued by Regina, Dylan will use the information he learned from his future self and the advanced technology from 2055 to prevent the deaths of the soldiers and scientists who worked in the Noah's Ark Plan, therefore preventing their children from becoming Full Faces/Helmet People, leading to "Full Face Paula" and her colleagues being erased from existence.

The exact amount of children is unknown. However, it was stated that "dozens of children harmed by the dinosaurs have been put to sleep in life-support capsules and entrusted to the people of the past" and around five or six were seen, dead and alive, including the androids. 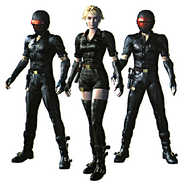 Paula with her teammates

The helmeted boys escape after failing to kill Regina

Possible body of a helmeted boy kept in preservation liquid.

Preservation tanks containing bodies assumed to be of Helmet People.

Body of another helmeted boy (right)

Dylan realizes a helmeted boy is about to shot him

Paula tries to stop her colleague from killing Dylan

Paula looks at her fallen conrade

Dylan wrestles the android to the ground

A picture of one of the Helmet People in the Report on Unidentified Body.