Giganotosaurus (pronounced /ˌdʒaɪɡəˌnoʊtəˈsɔrəs/ JYE-gə-NOH-tə-SOR-əs) is a genus of charcaradontosaurid which lived in the Mesozoic Era. One of the largest dinosaurs that ever lived, it dwarfed other large therapods like Tyrannosaurus.

At least one baby Giganotosaurus was captured as part of the Noah's Ark Plan, which aimed to preserve the timeline by relocating certain dinosaurs to the far future. When the dinosaurs ran amok, the Giganotosaurus escaped and made its home in the jungles, quickly becoming a highly territorial apex predator able to easily kill the more populous Tyrannosaurs. All encounters with the temporally-displaced Edward City soldiers resulted in their deaths and, as a result, for years the Giganotosaurus was seen as a mythical animal created to explain why no remains could be attributed to 70% of missing soldiers, though the existence of dead Tyrannosaurs indirectly proved its existence.[3]

S.O.R.T. agent Regina witnessed a Giganotosaurus fight and kill a Tyrannosaurus outside the Edward City missile silo, the latter of which was downed and killed, despite the Giganotosaurus receiving a bite to its right leg.[4] This Giganotosaurus broke into the missile silo, where it toppled a missile that prematurely exploded. The animal survived and escaped despite sustaining burns, and then broke into the Habitat Support Facility. There, it was killed by a satellite laser system.

Giganotosaurus is identifiable for its red skin with dark brown stripes, and horns growing on its head. It stands 7 meters tall, and has a length of 21 meters, it initially has yellow eyes yet after the explosion it's eyes appear damaged and monochrome white. The explosion also melts it's skin, fading its pattern and making its face appear lumpier.

The following move names and stats are derived from the DINO CRISIS 2 Official Guide Book.[5]

As the game's most powerful enemy, the Giganotosaurus has no true weakness at all, even Anti-Tank Rifle and Solid Cannon don't seem to do real damage to the dinosaur. The Giganotosaurus' roar can and will send the characters flying away, as opposed to the Tyrannosaurus' roar which only disorientates Dylan/Regina. The dinosaur can also use its massive jaws to slam the platform where the character is, dealing moderate damage.

The first battle against the Giganotosaurus commenced in the Missile Silo facility. Regina must use the two flame throwers located on the platform by first turning it on, then use Regina's stungun to release the flames to the Giganotosaurus. Repeat the process several times until the huge beast is down and proceed to do the required task of the chapter.

The next and final battle takes place in the time gate laboratory, where a self-destruct mechanism is triggered. The player's objective is to initiate a satellite to fire a laser beam to the Giganotosaurus to defeat her. Dylan must activate several computers in order to fire the beam, with the Giganotosaurus trying to stop him by any means necessary. 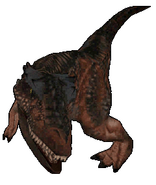 Giganotosaurus picking up T. rex, about to throw it

Giganotosaurus about to kill T. rex

The differences of Giganotosaurus and T. rex

Giga before the explosion

Giga after the explosion. (look at the eyes)