2.5 metres (8 ft 2 in)
Oviraptor is a species of dinosaur collected as part of the Noah's Ark Plan. Its name means "Egg Robber". The Oviraptor lived around 70 million years ago. Their remains are found in Mongolia. It is also shown within the game that Oviraptor, like the Carnotaurus, might sport sexual dimorphism.

The Oviraptors thrived in the future earth environment created by the Noah's Ark team. As the forest spread on the west of the lake to take over the military outposts, the Oviraptors made the southern portion of the jungle against the river their territory, surrounding the Third Energy Facility and, later, taking it over following its abandonment.

Although they are nearly similar in appearance with the Velociraptors, the Oviraptors are actually part of the Oviraptoridae family; with crests on their heads, toothless beaks, long grasping arms, long legs and tails as their primary features. The Oviraptors are perfectly suited to live on dry lands and deserts. They were carnivorous (maybe omnivorous) dinosaurs that hunted with their beaks and arms. Their beak also serves to break the shell of eggs and animals. In Dino Crisis 2, they have sexual dimorphism (males are green and females are brown) and also spit venom (in Dino Crisis 2, only the males spit venom, but in Dino Stalker, the characteristics of male and female are inverted).

Attack values are given as they are in the Normal difficulty. Hard stats multiply it by 2 (e.g. a Blue jump-and-scratch being 120 damage), while Easy is reduced by one third (e.g. the same attack at 40 damage).[2]

The Oviraptors serve as one of the game's enemy grunts. As the file says, heavy firearms are not recommended to fend off a flock of hungry Oviraptors, as they can cover the distance between them and the player by doing a jump-kick. The Heavy Machine Gun is recommended for taking care of them, and if you're surrounded, the Firewall should keep them at bay.

Most often you will find the male Oviraptors, which are green, weak and spit poison. Sometimes you will see the females, which are brown and do not spit poison, but are stronger.

Oviraptor is playable in Extra Crisis. In this mode it has access to all of its moves. It is notably the cheapest dinosaur to purchase. The player 2 colors in Dino Duel are the orange-brown colors from the female Oviraptors.

Oviraptors return in chapter 4 of Dino Stalker, in a desert-like area in Hyperspace. The Oviraptors would sometimes jump out of sand and try to attack the player in groups. A rapid-firing weapon is required to fend the dinosaurs away. Here the functions of male and female are inverted, as the females (pink in this game) spit poison, and the males are stronger (and also steals recovery items and weapons in the area). 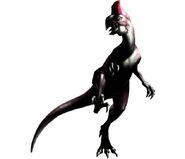 The Oviraptors spitting venom was most likely inspired by the Dilophosaurus in the 1993 film Jurassic Park.