[Jp name not given]

Patrick Tyler (b.c.2523)[1] was a soldier who served in Special Operations And Reconnaissance (SOAR), a special operations task force. He was one of the survivors of the Ozymandias Incident. Tyler excelled at high-speed hand-to-hand combat with the use of booster packs.[excerpt 1]

Tyler and his younger sister grew up alone following the unexpected deaths of both their parents.[2] When he grew up, he joined the military and become a SOAR operator. Due to this career, however, they saw very little of each other, and he was on deployment when she got sick and died in early 2548.[2] Later that year, his SOAR team received orders to investigate the Ozymandias, a colony ship reported missing exactly 300 years ago, which had unexpectedly warped in orbit over Jupiter. The ship's defences responded to the SOAR mission by firing on the Seyfert, followed by the shuttle. Tyler was one of four survivors in total, and made his way into the hangar deck through an airlock with fellow operator, Sonya Hart. Captain Jacob Ranshaw made his way onto the ship separately, while McCoy arrived minutes after Tyler and Hart, where he was mauled by a genetically engineered reptile, Australis, which was itself eaten alive by a pack of smaller Rigel. 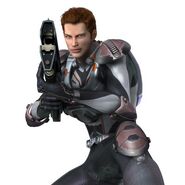 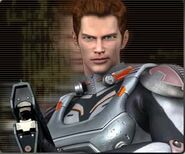 Patrick in Wheel of 4 Tune

He is of great composure, dark brown hair and blue eyes. Uses a black and white and a jetpack spacesuit. In the game Wheel of Fortune appears wearing a brown patalón and jacket.

Cite error: <ref> tags exist for a group named "excerpt", but no corresponding <references group="excerpt"/> tag was found, or a closing </ref> is missing