17 metres (55 ft 9 in)
The Plesiosaurus was a marine reptile native to the Mesozoic era that lived during the Jurassic and Cretaceous period, but experienced a return from extinction owing to a Third Energy disaster.

Unlike any other marine creatures, Plesiosaurus possess long and flexible necks that allows them to sneak up behind their prey. The Plesiosaurus has four paddle-like fins similar to a sea turtle. The creature's head is short, and its jaws are lined with small sharp teeth perfectly designed to feed on fish. Some species of Plesiosaurus are known to grow up to 3–4 meters, while the in-game animal is 17 m long, making it more similar to Elasmosaurus, Plesiosaurus 's largest relative.

The Plesiosaurus were among the creatures taken by the Noah's Ark team as part of a plan to undo the ecological damage brought on by a temporal anomaly on Ibis Island. They inhabited a large lake near where Edward City would later materialize - also due to a temporal disaster. Over the years they encroached on the Third Energy Facility, settling in its flooded reactor rooms, thus preventing any meaningful maintenance of the facility.

Dylan and Regina came under attack from a large group of Plesiosaurus during their first crossing of the lake. Mike Wired also had to contend with Plesiosaurus as he explored Hyperspace.

The Plesiosaurus also serves as the main aquatic enemy in a level of Dino Stalker, where the player must ride a boat through a river filled with many Plesiosaurus, Kronosaurus, and Pteranodons that appears along the river.

Plesiosaurus is capable of four distinct attacks. Two are unique to the surface encounters; one is unique to the underwater stage. "Bite" itself has different damage stats, with it being more damaging on the surface.

The first time this species is encountered is when Dylan and Regina leave the Jungle for the first time and the player must shoot them as they are attacking the ship. As long as the player has good aim they're not particularly hard to bring down. They are also encountered in the docks at the Third Energy Facility, but can be killed with one shot from a Heavy Machine Gun. A Plesiosaurus also appears in the submerged Third Energy reactor room, where it serves as the stage's boss.

Their necks are very flexible, with this advantage they are quick, so watch out when you come in contact!

As you can tell from this picture the Plesiosauruses are BIG! 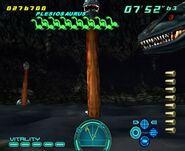 As seen in Dino Stalker

In real life, the Plesiosaurus s only known to have reached up to 3.5 meters in length. Its in-game length of 17 meters makes it more comparable to its relative, Elasmosaurus.