Pteranodon is a flying prehistoric creature that appears in the first two games of the series. They are probably exaggerated in ferocity because in reality they were primarily fish eaters. Pteranodon is not an important creature of the series, but can be formidable, especially in groups.

The Pteranodons were brought to the Future Earth to avoid the temporal catastrophic created by the Third Energy Rundown. As time goes by, the creatures became hostile towards humans, and even went as far as battling them for territory at the Third Energy Facility.

Pteranodons are encountered in three areas of the Ibis Island research facility, all of which are outdoors. When playing the game it is generally better to simply run past them. Don't bother to shoot them with the shotgun and don't waste ammo with the Grenade Gun. If necessary, just shoot at them with a pistol. Even if they don't go down, it may stop them from attacking for a while. They will swoop down at Regina and either knock her down or pick her up with their talons.

Similar to those in the first game but are in much larger (sometimes unlimited) groups. With the games larger stock of weapons and unlimited ammo card, use anything fast firing. The two handed Submachine Gun is useful as it can shoot at two targets a once. Missile Pods will also home in on them, making them easy prey.

Expect them to spawn all over the coastal area of the Third Energy Facility and anywhere that a large carnivore has died.

Their first appearance is where the first encountered Allosaurus died if it's killed. Second time is when Regina enters the Military Facility to save Dylan. Third time is when Dylan and Regina and are riding by the boat to the Third Energy Facility where Pteranodons flock in pairs to Plesiosaurs. Finally Pteranodons are seen in Edward City in the vicinity of David's crashed helicopter.

Pteranodons are also encountered in Dino Stalker. They make their first appearance in the first level where the player must evade their attacks and shoot them. The second time they are fought directly is on the third level during the boat trip, and lastly in the City where they can be seen at the Power Plant and the bridge before Carnotaurus shows up.

A Pteranodon is grabbing Regina in the 3rd Energy Facility. 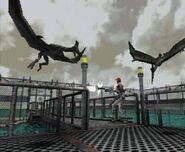 In real life, pterosaurs couldn't grab things with their feet, which were not prehensile and only used for walking.