Sonya Hart (b.c.2524)[1] was a member of the Special Operations And Reconnaissance unit. She was a cool headed soldier and focused entirely on competing her mission.[2][excerpt 1] Hart served in a support role for her squad, being responsible for equipment maintenance and information gathering.[1][excerpt 2]

In 2548 Sonya was assigned to the probe ship Seyfert, and was noted as one of the few female crewmembers.[2] In that year the Seyfert was assigned to investigate the mystery surrounding Ozymandias, a ship that had disappeared three centuries prior only to unexpectedly enter orbit over Jupiter. Seyfert and the SOAR shuttle were destroyed by Ozymandias' defenses, and Sonya was one of only four survivors to reach the ship. 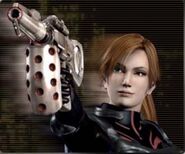