The Third Energy is a system that creates an energy source with various potentials and outcomes. Generations of research and experimentation furthered its capabilities and use. The series mainly revolves around the Third Energy and its incidents.

At the turn of the 21st century, fossil fuels drained to such an extent that Nuclear Power - "Second Energy" - has become a necessity. Due to the hazardous nature of its accidents, research begins on a hypothetical third generation of reactor which releases no hazardous waste products, nor could be exhaustible - this is dubbed "Third Energy".[1]

The Third Energy theory was developed by Dr. Edward Kirk which began research for the alternate clean energy source. Though the project began with a large pool of funding, physics academics raised concerns over Third Energy as a reliable resource, considering it technologically impossible. Due to this and Dr. Kirk's hostile attitude towards critics, the government lost interest in the project and ceased its funding.[2][3] Around this time, Kirk was approached by the Borginian government, who wished to finance his project in exchange for re-developing it as a weapon. Kirk agreed, and sabotaged his own Third Energy reactor to cause an explosion, destroying the lab and allowing him to fake his death.[2]

A reactor was quickly constructed in 2006 on Ibis Island to continue research. However, Third Energy proved to be too powerful to generate, and the facility exploded when the reactor was tested.[2] Work began on a new reactor with modifications over the initial design. When testing the Third Energy weapon in 2009, the explosion ruptured spacetime and everything within a 500m radius of the epicentre vanished, replaced with an ancient jungle populated by prehistoric animals. Outside this area there were smaller ruptures, and researchers and soldiers found themselves sent into the distant past as dinosaurs appeared in the underground facility. Significant casualties took place in the confusion, though Dr. Kirk himself survived. The accident coincided with the arrival of a special forces team sent by Dr. Kirk's home country to apprehend him and the research.

In the following months, the government quickly constructed a new Third Energy reactor around a closed-off military base and military research site. Housing for workers and their families was constructed in what would become known as Edward City. A year into the research, there was another accident with the Third Energy reactor as the epicentre, sending it; the city and the nearby military facilities three million years into the future. Desperate to secure the data and rescue survivors, the government sent TRAT to the future, re-enacting the incident in May 2010 under the theory the rescue team would be sent to the same place. Though this hypothesis was proven correct, a marginal error led to them arriving some twenty years further into the future. The 3rd Energy Disc was recovered and returned to 2010, though all 1700 civilians and workers were declared dead. Significant research went into Third Energy in the years following the incident, as Edward City's researchers had twenty years to perfect their research before their deaths.

In the 2050s it was discovered that the Ibis Island accident had caused errors in the fossil record to come about due to animals being exchanged. Afraid the damage to timespace could paradoxically prevent human evolution taking place, the Noah's Ark Project began. Using Third Energy, a team in 2055 collected time-displaced animals and sent them three million years into the future, where a Cretaceous jungle was grown for them. Though the team succeeded in eliminating the time-displacement threat, their computer malfunctioned, releasing the dinosaurs from containment and closing down the time gate as a means of escape, dooming the research team.[4] The escaped dinosaurs eventually discovered Edward City and killed the inhabitants.

Functions - The Various Potentials of the Third Energy[]

The Third Energy is a system that initiates a reaction from the particles of the atmosphere and transfers that motion into energy. It takes in the Earth's atmospheric gases (specifically O2, CO2 and N), and starts up a reaction which leads to Ionization of the constitution of the air, extracting the resultant electron movement as the release of energy in a chain-reaction. The by-product of Third Energy is the reintroduction of Peroxide compounds into the atmosphere - specifically Ozone.[5][6]

The results of the system depend on how much energy is produced, contrasted with how well it can be controlled.

If stabilization ultimately fails, it becomes beyond control and evokes an “overload.” There are two stages of this occurrence, each determined by how much energy is produced before maintenance failure.

At high energy, the huge amount of energy creates chain reactions that begin to disintegrate the surrounding air. The ensuing explosion will then vaporize everything within its radial capacity. The weaponized version of the Third Energy works by being able to control this outcome.[7]

At more substantial energy levels, this phenomenon will advance to affect space-time. If an overload is caused at this point, a massive geographical time shift will occur. The consuming explosion will transfer the affected radius into a different point in time.

The extraordinary high energy levels advance the system into its space-time altering potential. This time warp functions by transferring a pocket in space to that of a different time; forward or back. At an uncontrollable higher magnitude, a massive "overload" can occur. This causes a time disruption that would ensue the area where the "accident" occurred to swap places with the same geographical location from a different time, and vice versa, bringing the contents of what would be in the location in the other time back to the present time of the "accident".

The experiment on Ibis Island, for example, exchanged select pockets in space. Pulling contents that occupied that same space during a different time into the present; with creatures that were on the island millions of years ago. The 2010 incident however resulted in an overload, and shifted its entire radius rather than pockets; exchanging it with a jungle that shared that same radial space in a different time. What is transferred is not random, but according to specific occupation of space.

This however, is the Third Energy acting on its own. If perfected, it may grant safe travel between time and may even select when. Such an advancement requires a high level of research and technology, and takes years to construct. 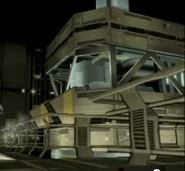