8.5 metres (27 ft 11 in)
Triceratops is a species of herbivorous dinosaur which lived in the Earth's far future.

Several Triceratopses were captured in the Noah's Ark Plan and transported three million years into the future in order to avert a temporal anomaly which risked destroying mankind. The Triceratopses escaped containment in a disaster which cost the lives of all Noah's Ark personnel, and became wild. These dinosaurs spread across both sides of the lake, but initially kept their distance from the human settlements. However, due to their obsessively-defensive nature and photographic memory, the herd caused significant damage to Edward City in their search of vengeance against individual soldiers who had threatened them.[1] In a possibly-unrelated attack, several Triceratopes menaced the city outskirts some months later. One was killed on the haulage road from the port to the city, the soldiers having used special poison-tipped bullets to kill it.[note 1] When Dylan and Regina made their way to the new military base near the city, they discovered that another Triceratops had run amok and killed all humans and Velociraptors in the area in anger over an infant Triceratops' death. The two were chased into the jungle by jeep when the herd became aware of the two's presence.

As a quadruped dinosaur, Triceratops can grow up to 29 ft in length, with a large head armed with three horns and a massive frill, giving this dinosaur more than enough power to battle large predatory dinosaurs. An adult Triceratops can weigh up to 9 tons. The Triceratops will use its horns as a means of fending off any predators, as well as engaging with its challenger during mating season. Despite the Triceratops' short and bulky legs, it can actually run pretty fast, as seen in Dino Crisis 2. Triceratops was a herbivore that lived in the Cretaceous Period around 70-65 million years ago, roughly at the same time as Tyrannosaurus.

The Triceratops is featured in one of the games "On-rail" shooter parts, where Dylan and Regina have to escape a parental team of angry Triceratops that wrongfully thought that the two killed their young. They used a jeep with a mounted rifle on the back in order to fend the enraged parents off.

Before this level, it used as a background dinosaur with a pair traveling through a field when you play as Regina. It is most possibly that this pair of Triceratops were heading towards Edward City.

A gray Triceratops is also encountered, albeit briefly, in an abandoned city in Dino Stalker. This Triceratops doesn't directly attack the player, instead it knocks and throws barrels at them. No weapon is capable of injuring it, however, this is not necessary, as the grey Triceratops will soon cease charging when it tries to chase after the player's car through a burning part of the street. 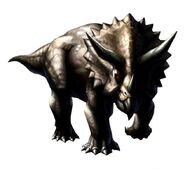