Tyrannosaurus is a genus of large, carnivorous theropod dinosaurs that lived in the same time period as Triceratops. Extinct naturally some 65 million years prior to human evolution, temporal anomalies in the 21st century brought about their eventual re-introduction into the wild.

The first recorded event of human-Tyrannosaurus interaction was the 2009 Third Energy Criticality Incident, when a timespace "exchange" caused by a Third Energy experiment sent a number of prehistoric creatures to 21st century Ibis Island. At least one T. rex was among them. This Tyrannosaurus killed and ate a number of humans during the night, including Cooper, a S.O.R.T. agent sent to investigate the experiment. It was revealed to have evolved to have an "obsessive" nature, persistently hunting for Regina, another agent, regardless of the many dinosaurs it could have consumed. It's relentless search for Regina at one point went as far as destroying the team's extraction helicopter by attacking it, mid-air; this forced the team underground.

The Tyrannosaurus made its way down a large cargo elevator, following a group of survivors attempting to collect equipment necessary for their escape plan. Reaching the bottom level, it stumbled upon Regina again, but was knocked unconscious when it damaged an electrical generator.

This Tyrannosaur was killed by the agents the following morning as they escaped the island.

No source is currently available confirming whether it was killed by a bomb explosion or in a Third Energy explosion.

In the 2050s, the Noah's Ark Plan was prepared. In order to prevent an increase in temporal anomalies from altering -or preventing- human evolution, the animals were forcibly displaced, and sent three million years into the future through an improved understanding of temporal mechanics; they were to be returned to their respective time periods once the temporal crisis would come to an end. A number of Tyrannosaurs were taken as well.

When the MTHR computer confining them in comatose conditions became corrupted, it began experimenting on the animals, turning a Troodon into a "leader" animal influencing the others. Possibly as a result of its corruption, the dinosaurs escaped and killed the human staff members, and escaping into the wild.

The genus became considerably notorious in this new world - an unrelated temporal anomaly sent a military-run city and the surrounding area to around the same time (accepting a few years leeway), providing teams of soldiers tasked with killing them. Unfortunately for the military, no T. rex was reported to have been killed, and they were considered to have no real weakness.

One Tyrannosaurus hunted Regina and Dylan Morton of a 2010 rescue team for miles in the forests against a lake, along with Edward City on the opposite side. Having lost an eye during its first appearance, the dinosaur proved to be just as obsessive as the one Regina encountered one year earlier (relative to her time-frame). This ultimately led to its presumed downfall when it stumbled into a Giganotosaurus' territory near the Missile Silo, where it was shaken like a ragdoll before being killed.

Another T. rex, notable for its pitch-black skin, was sent into Hyperspace as a result of the malfunctioning MTHR's manipulation of "Hyperspace", which was ironically causing the temporal incursions that the Noah's Ark team was sent to prevent. A Second World War fighter pilot, Mike Wired, was tasked by Dylan with shutting down MTHR and finally ending the temporal crisis. The pitch-black Tyrannosaurus first made itself known in an entire displaced city, before following Mike all the way up an active volcano. It was heavily injured in the fight with Mike, and fell into the lava.

Main article: Australis
As its crew succumbed to the effects of radiation sickness en route to a colony world, the MTHR system on board the Ozymandias was tasked with creating a new race of humans based on the crew's DNA samples. Unsatisfied with the humans' weakness to cosmic rays, it instead began culturing dinosaur DNA based on available reptile samples, and began augmenting those animals, instead. The outcome of Tyrannosaur experimentation was the Australis, a failed attempt at engineering an animal capable of surviving in vacuum.

The T. rex is perhaps the most feared dinosaur of all for various reasons. In real life, they have a length of around 12–13 meters and weighed up to 8 tonnes. It has great strength; being able to easily crush bones. It is big enough to swallow its meal whole. It has thick, strong tail, bulky legs, and surprisingly tiny arms which seems to be of little use. The T. rex's head is large and its jaws are lined with sharp powerful teeth. In the Dino Crisis universe, all of these characteristics are amplified at least a bit. In this universe, they are over 14 meters in length and displayed exaggerated durability and strength. Its appearance in Dino Crisis is heavily patented on the Jurassic Park movie Tyrannosaur. It has eyes on the sides of its head like a horse or the Jurassic park Tyrannosaur, whereas in real life, its eyes where positioned like those of a dog or cat, facing forward and at the top of the skull. However, compared to the creature in Jurassic park, the shape of the skull is much more like its real counterpart in many respects, with a narrower, lower snout and rounder ridges above the eyes. The skin is very tight-fitting, it has a very flexible tail and very short toes with elongated claws. In Dino Stalker, the Tyrannosaurus, despite being way over-sized, is very scientifically accurate in terms of design. It has inward-facing palms (in the game, in concept art of has primates wrists), correct finger length, eyes facing forward atop the head, a narrow, low snout, small, low nostrils, and a very accurate skull shape and a stiff tail.

Tyrannosauruses encountered in the game are portrayed as mean-spirited, implacable and possess almost sapient levels of intelligence and a genuinely malicious streak behind their instinctive nature to feed and survive. They also have a habit in toying with their victims prior to killing them, yet at the same time, capable of holding grudge and hatred towards ones who proved persistent enough to be a thorn in their sides (ex. Dylan and Regina). In fact, they will go so far swim to reach their prey and enemy alike. Most of these can be observed in Cyclops, who relentlessly pursued either Dylan or Regina in some occasions for seemingly blown one of his eyes (though it was David who did so with a RPG).

The Tyrannosaurus serves as a playable character in the Dino Crisis 2 Extra Crisis minigame "Dino Colosseum". In this mode, it is large and moves very slow even while running. This version is also missing its eye. Player 2 gets a black T. rex in Dino Duel mode if they select it. However, the player 2 T. rex has both eyes intact. This Tyrannosaurus bears resemblance to the Pitch-Black Tyrannosaurus from Dino Stalker.

The Tyrannosaurus cannot be killed in either of the games by conventional means, and serves as an essential boss character in certain, if not most parts on all 4 games. The T. rex can devour the player whole with ease, should the player not defend themselves. Although most weapons won't make the dinosaur flinch, some strong firearms such as the Missile Pod or Anti-Tank Rifle, which can be bought later in the game, may deter the T. rex, only for a short time.

In the Edward City level, players would take control of a mini tank while escaping from the T. rex. Although the T. rex can be brought down using the tank's cannon, it'll get back up again and chase after the player.

Near the game's climax fight, the Tyrannosaurus is killed by a Giganotosaurus and replaced as the new "stalker". 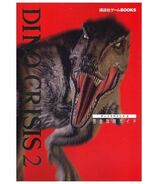 T-rex renders from Dino Crisis 1 & 2, including the green T-rex from Dino Duel.

The T. Rex is approaching Dylan and the helmet people.

The T. Rex appearing on the launch site.