4.8 metres (15 ft 9 in)
Velociraptor is the most basic enemy in the games that feature them, serving primarily as the "grunts". In all Dino Crisis games that they are featured in, the Velociraptors have various colors that are all slightly different from each other, though the differences between each color vary depending on which game you are playing.

Velociraptors are small, agile predators of the Dromaeosauridae family. The most prominent feature of a Velociraptor is the sickle-shaped claw on its feet. These sickle claws are capable of slicing through the victim's flesh, and may cause bleeding. They also have long arms, pointed snout, and long steady tails which help them to quickly change directions while running. Due to their small size, Velociraptors often hunt in groups. Their behaviour is very uncoordinated and they swarm prey in mobs, with no real tactics other than superior numbers. They are less pack hunters but more solitary animals congregating into temporary groups or flocks if a food supply presents itself. Unlike their counterpart from Jurassic Park, they are quite stupid and will ram into a wall of lasers repeatedly to get at Regina. However they can still open unlocked doors and will flee from Tyranosaurs suggesting they aren't totally reckless. Their doesn't appear to be a defined hierarchy among them or any coordination among group members.

They were the most common prehistoric animals in the Ibis Island facility. They were incorporated into the game in a much more suspenseful and often terrifying way than they were in the sequels. They commonly stalked the corridors and rooms of the facility, occasionally ambushing Regina through windows or gates. Regina is alerted to their presence often by snarling and the clicking of their claws against the ground before she even sees them.

Light firearms are the best way to deal with these dinosaurs, as it's a good idea to save the more powerful gear for later enemies.

They come in a number of colors, with some having a greater resistance to firearms, and cause more damage when they attack Regina. In the middle of the game they come in pairs which is more dangerous.

Their basic attacks is their bite. If Regina tries to run away from them, they will try to jump on her and nail her to the ground. Sometimes they grasp Regina by her arm and shake her violently from side to side. They may do an upwards headbutt instead of biting sometimes while chasing Regina. They have a stronger version, known as blue raptor variant.

These are the most common dinosaurs that you will meet in Dino Crisis 2. They will quickly jump at you with long sharp claws, pin you down and rip you to pieces with their sharp teeth. They can also whip you with their long tails. Using the Firewall is a good idea to defend yourself. Later in the game, the Velociraptors come in different variants and are harder to kill if you are using light bullet firing weapons i.e. the handgun, sub machine gun etc. However, firewall and Heavy Machine Gun are very effective against them.

They have a tendency to come at you in groups of two or three, so the use of secondary weapons such as the firewall becomes a necessity if you don't want to take large amounts of damage.

The variants of Velociraptors come from their scale color: from brown, swamp-green, red and blue. Running from them is not recommended because they are fast and will catch you easily. The blue raptor is capable of killing Regina in one or two hits.

In Extra Crisis mode, you can play as the Velociraptors. They are very fast and does average damage. Player 2 gets to play as a blue raptor in Dino Duel mode if they select it, but it will have the same health and damage as player 1.

The Velociraptors are once again present in the sequel of Dino Crisis 2. The raptors have tendency to jump out from unexpected places and come in groups. They can be disposed off by using light firearms so you'll be able to keep your stronger weapons for later use. Their stronger version in this game is the Utahraptor, that is bigger and darker in color. Trinity has the ability to summon Velociraptors and Utahraptors.

Velociraptors eating Regina after killing her

Regina encounters a Velociraptor for the first time 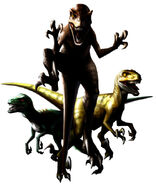